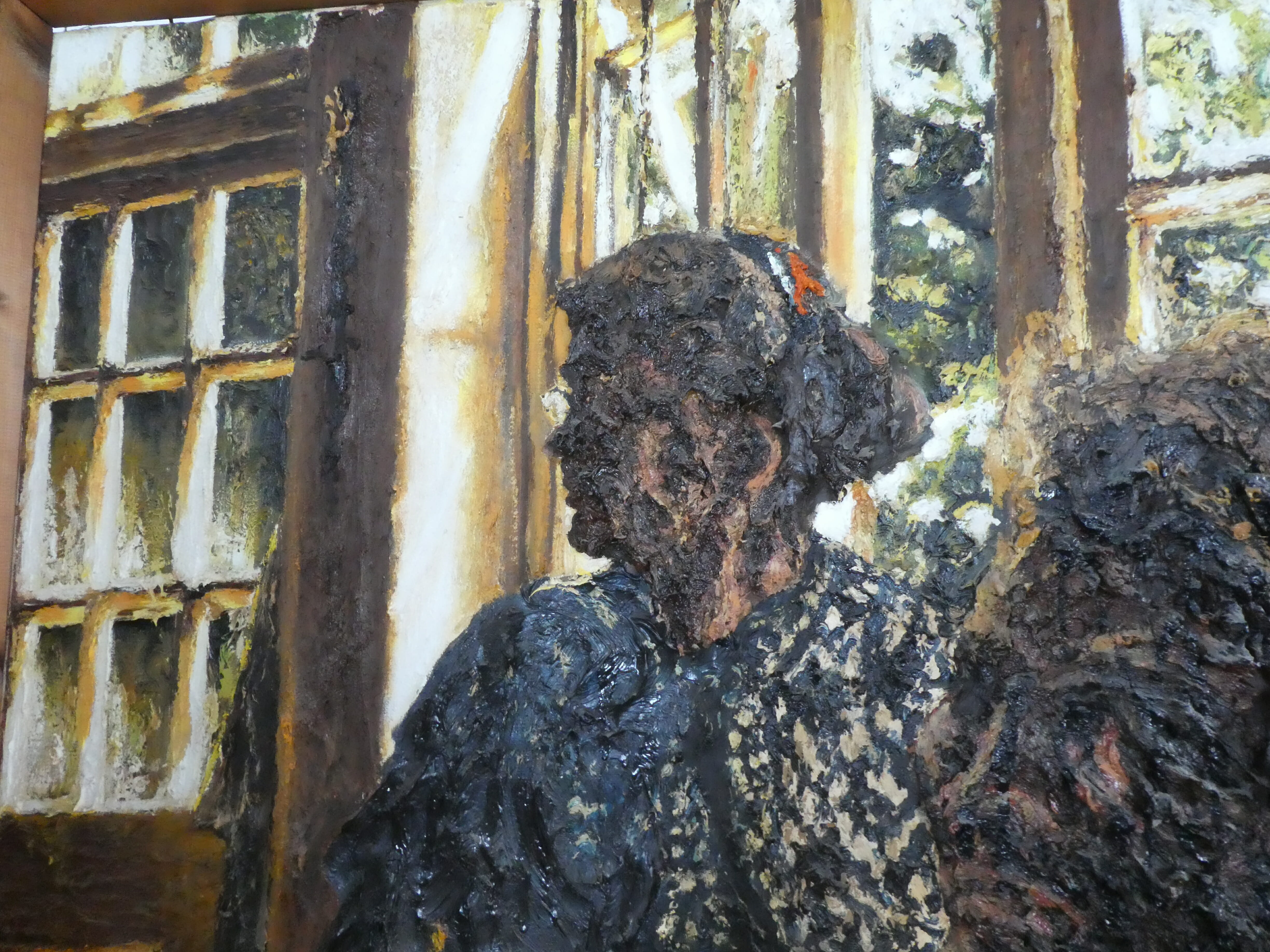 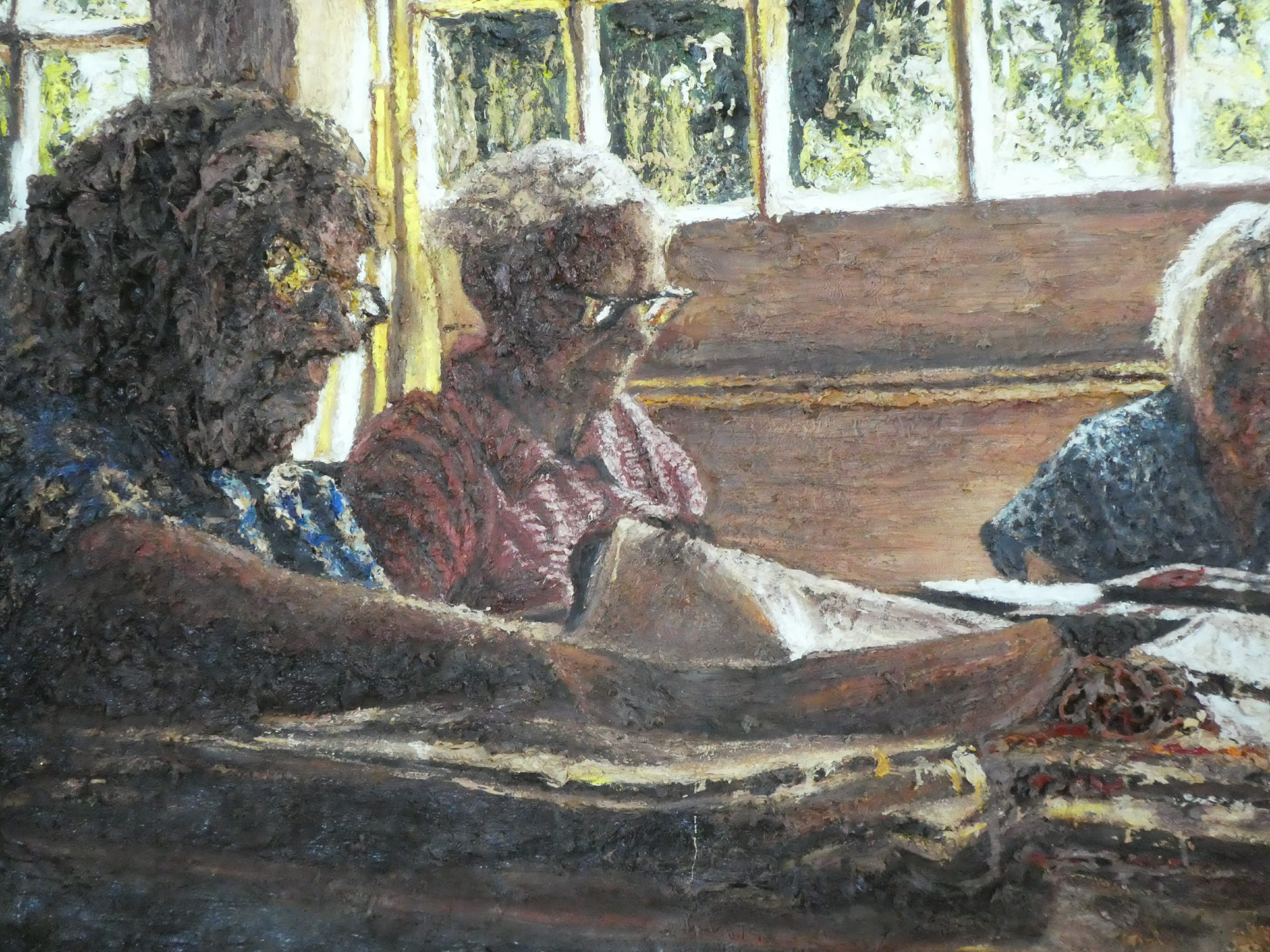 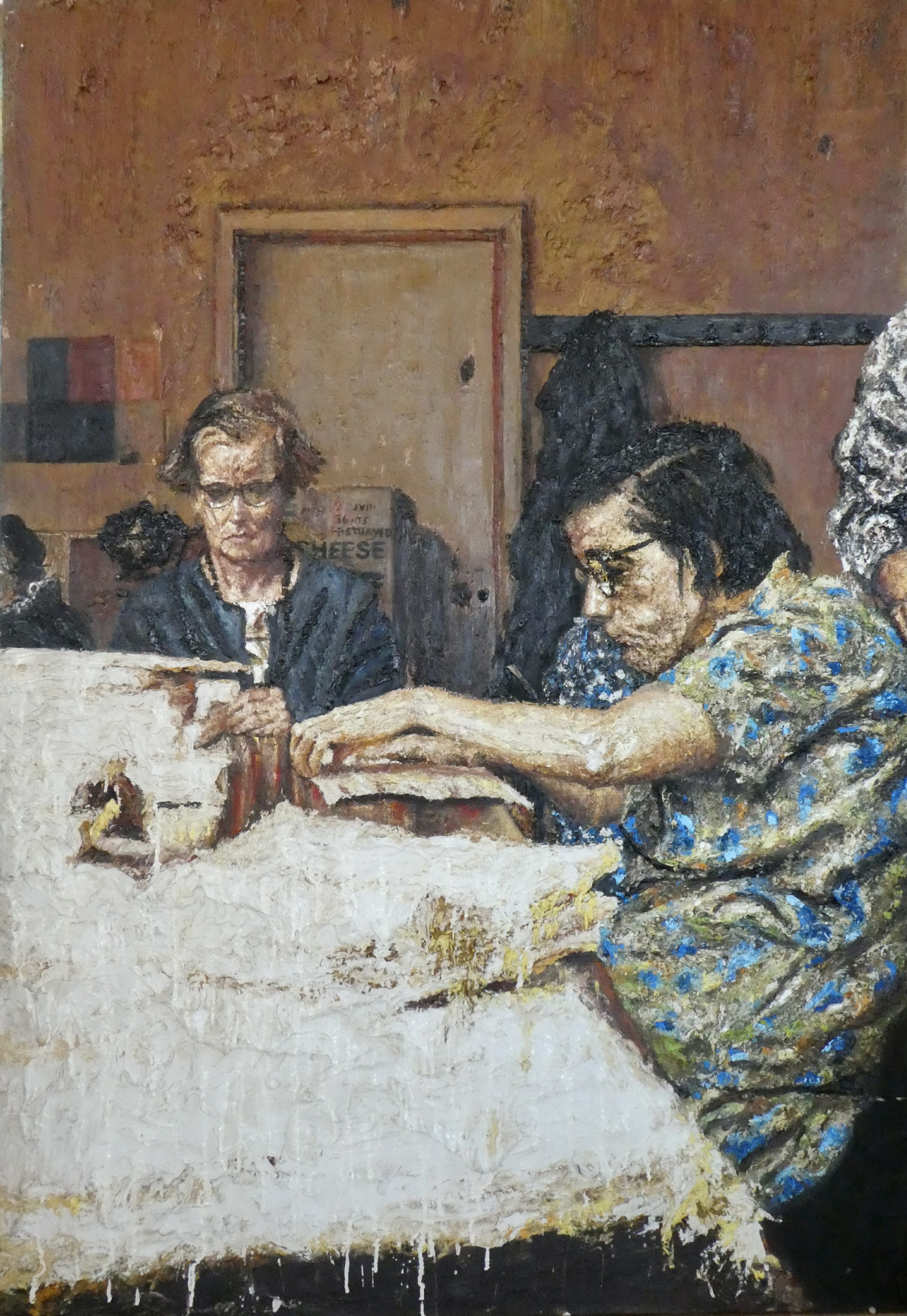 Women at a table

Detail: Women at a table

Themes of progression of the treatment, representation and eventual destruction of the human form are reflected in the figurative works such as shown here.  The disintegration of flesh, form and features caused by age ‘Women’. the abstraction and destruction of faces, limbs and bodies through death ‘Bodies’ the movement, distortion and fragmentation of features and faces over time  in the ‘Heads’ series

On paint and brushstrokes

The powerful effect layering paint has on a flat surface to create a three dimensional form is most evident and was originated in in the ‘Women’ series. This effect seeks to create a monumental, forceful and heavy weight to the form of the Women as they extend out of the painting, their flesh, clothes, hair, skin and features given depth and life through the thick layering of paint, usage of different and varied painting and brush stroke styles and incorporation of materials such as cloth in the work.

In these works the viewer decides what the meaning or the story is in each image. The works do not have descriptive titles or a backstory. It is up to the viewer to interpret what they see. Equally, the subjects of the work are anonymous, the women in the ‘Women’ series are not real people. They are  simply old women working together in rooms, isolated from one another, performing mundane and repetitive tasks for little to no purpose.

Themes of anonymity and isolation present and reoccur often throughout the series and the work, as do themes concerning the banality and simplicity of everyday life, the vibrancy, joy and colour of nature as seen in sunlight and
the frailty and beauty of the human form, rendered in character by the very act of its disintegration and fragmentation over time and the inevitability of its complete destruction in death.

Works by London based artist

This website uses cookies to improve your experience while you navigate through the website. Out of these, the cookies that are categorized as necessary are stored on your browser as they are essential for the working of basic functionalities of the website. We also use third-party cookies that help us analyze and understand how you use this website. These cookies will be stored in your browser only with your consent. You also have the option to opt-out of these cookies. But opting out of some of these cookies may affect your browsing experience.
Necessary Always Enabled
Necessary cookies are absolutely essential for the website to function properly. This category only includes cookies that ensures basic functionalities and security features of the website. These cookies do not store any personal information.
Non-necessary
Any cookies that may not be particularly necessary for the website to function and is used specifically to collect user personal data via analytics, ads, other embedded contents are termed as non-necessary cookies. It is mandatory to procure user consent prior to running these cookies on your website.
SAVE & ACCEPT
Get Quote